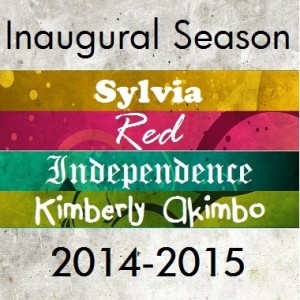 Click on a play’s title to learn more, meet the cast and crew, see photos, read reviews, and more!

When Greg adopts a stray dog, Sylvia, his wife Kate is less than thrilled.  Pet lovers and skeptics alike will recognize the pull between the love/hate dynamics in this comedy which explores not just the dynamics between a man and man’s best friend, but marriage, empty nest syndrome, communication, and more.

“Dramatic literature is stuffed with memorable love scenes, but none is as immediately delicious and dizzy as the one that begins the redeeming affair in A.R. Gurney’s new comedy, SYLVIA…” —NY Times. “I can only call it one of the most involving, beautiful, funny, touching and profound plays I have ever seen…” —NY Daily News. “Gurney’s mad comedy is the most endearing good time to trot down the pike in many a moon. Howlingly funny…” —BackStage.  Drama Desk Award nomination for Outstanding Play

To see pictures from our production, meet the cast, link to a review and more click HERE.

A powerful, disturbing study of a family divided against itself. Produced to critical and popular acclaim as part of the Humana Festival of New American Plays of the Actors Theatre of Louisville. “Mr. Blessing writes admirably well timed and weighted dialogue, and the play takes the cleverly invented characters through to a chilling end.” —Plays and Players (England). “Blessing has a hair-trigger sensitivity to what families are saying and doing now, this minute…” —Dallas Times Herald. “…a delicate balance of comic and tragic elements.” —Louisville News American.  Nominated for both the Tony Award and Pulitzer Prize.

Set in the wilds of suburban New Jersey, KIMBERLY AKIMBO is a hilarious and heartrending play about a teenager with a rare condition causing her body to age faster than it should. When she and her family flee Secaucus under dubious circumstances, Kimberly is forced to reevaluate her life while contending with a hypochondriac mother, a rarely sober father, a scam-artist aunt, her own mortality and, most terrifying of all, the possibility of first love.

“The Comedy of the Year. A haunting and hilarious new play. Mr. Lindsay-Abaire is an expert at tweaking, skewing and finally inverting established formulas. His plays tend to slide right out of predetermined pigeonholes. KIMBERLY AKIMBO is at once a shrewd satire, a black comedy and a heartbreaking study of how time wounds everyone.” —NY Times. “A zany, disturbing and strangely affecting comedy. It’s a bit of youthful happiness unlike any other.” —Associated Press. “I was bowled over by the singular theatricality of David Lindsay-Abaire’s KIMBERLY AKIMBO. The way this harrowing and hilarious work continuously shifts from satire to black comedy to realism could never work anywhere else…theatre at its most original.” —NY 1. “A wacky, touching and totally charming dark comedy that gives a whole new meaning to ‘coming of age story.'” —NY Daily News. “A breezy, foulmouthed, fleet-footed, warmhearted comedy. There have been many dark comedies about dysfunctional families, but this is one of the funniest.” —LA Times.  David Lindsay-Abaire won the Pulitzer Prize for his play Rabbit Hole.

Our inaugural season will be performed at Penelope’s Venue,
located at 12219 Dix Toledo Road in Southgate.