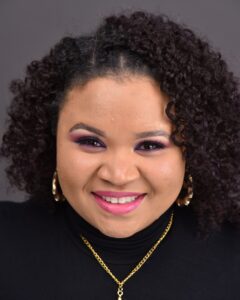 Ashley M Lyle (Ayamma Okafor) is so excited to be back at Open Book. She was last seen on the OBTC stage as Anne de Bourgh in Miss Bennet: Christmas at Pemberly in 2019. Some of her other credits include Ain’t Misbehaving at Jewish Ensemble Theatre, Mother’s Boyfriend is an Ass at Obsidian Theatre Festival, & Who Will Sing for Lena at Matrix Theatre. Ashley is also an antiracism activist within the community. She’s the founder of BLAQN (BLAQN.org), a small organization that honors Black Womxn performers and encourages Anti-Racist practices and policies in Michigan performing venues. She co-created “Towards an Anti-Racist Michigan Theatre” workshop with fellow Michigan actor & activist, Dan Johnson. Ashley also created the BLAQN companion podcast called “Black Queens on Stage,” which highlights Black women & nonbinary individuals, & discusses their experiences in the Michigan artistic realm (available wherever you listen to podcasts). She would like to thank her friends & the audience for coming to see the show, and especially thank her mother, father, step-mother, & brothers for their encouragement & continuous support.  ashleymlyle.com 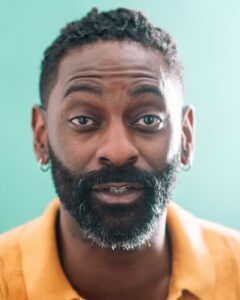 Nate John Mark (Wale Owusu) is originally from Grand Rapids, MI. He attended Western Michigan University where he graduated with a University Studies degree with a focus on Communication, Business, and English. He has always had a passion for performance and poetry which he satiated by hosting events on campus to create platforms for artists like himself to be heard and seen. After undergrad he began an Audience Development assistantship at the Oregon Shakespeare Festival where he was later introduced to performing Shakespeare with the OSF school tour. He has since joined Universes theatre ensemble, performed in Shakespeare tours around the country, and is now living as an actor and teacher in Detroit, MI. 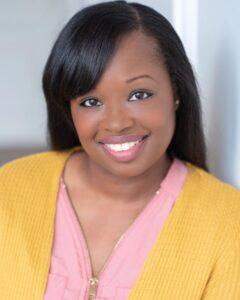 Krystle Dellihue (Dede Okafor) is excited to be back on Open Book Theatre’s stage acting in this delightful play with these talented artists. She was last seen in Open Book’s This Random World and Shakespeare in Detroit’s summer reading of The Tempest. She wants to thank Krista, K, and playwright Jocelyn Bioh for choosing to showcase a play where BLACK JOY is the main character. She’s had a blast learning about what Nollywood means to the Nigerian culture. She wants to thank Alice Fell for helping her find Dede’s voice. She wants to thank her family and friends for their support. To the audience: “Thank you for supporting the arts. Sit back, relax and travel back into the 90’s with Nollywood Dreams.” 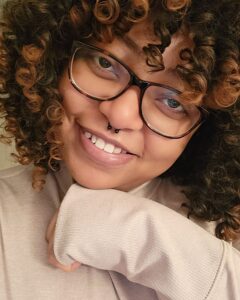 LaShanette ‘LaLa’ Harrison (Adenikeh) is an amazing entertainer in the Metro Detroit area. Over the years, she has immersed herself in all forms of art and isn’t looking to stop. Her training began at a young age as she became enamored with film, television, writing, comedy, and more. She found herself taking lessons at and eventually working for the Michigan Actors Studio. The next step in her journey was getting on stage as a stand-up comedian. This allowed LaLa to tell stories and connect on a level she hadn’t before. It didn’t take long for the calls to come in requesting her specific brand of humor. Currently starring with an ensemble in Jocelyn Bioh’s Nollywood Dreams, is honestly a dream for LaLa as she continues her journey towards her dream of being a full-time entertainer and making it to the big stage. 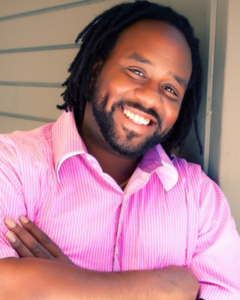 Sealoyd Jones III (Gbenga Ezie) – is a Multi Hyphenate Artist who can often be found teaching and facilitating Social/Emotional Learning workshops and classes when not expressing his art through singing, acting, and production management. Recent roles include Benny Perkins,  in a local production of Hands on A Hardbody, a performer in the Obsidian Theatre Festival, and a featured vocalist in the Spirits Soar Juneteenth Celebration at the Charles Wright Muesuem of African American History.  After two years of not being able to perform, he is excited and grateful for the opportunity to create with such talented artists. He would like to thank his family, especially his mom Jackie, brother Jonathan, and friends for their support. 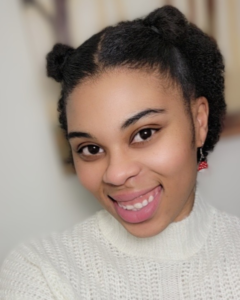 Bre Jackson (Fayola Ogunleye) is ecstatic about making her acting debut as Fayola in this production of Nollywood Dreams. Bre is a proud graduate of Wayne State University with a BS in Kinesiology. She has also trained at the Michigan Actors Studio under Kate Peckam.  Her whole life, Bre has loved “putting on a show,” as her family would put it. But when she isn’t on the stage she enjoys being involved in sports, traveling and exploring new places, and simply relaxing with a good book and her cats.  Bre would like to thank her family for supporting her aspirations, as some of her earliest practice came from making them watch her act out scenes from tv and movies. As her Dad would say, “She was born dramatic for a good reason.” 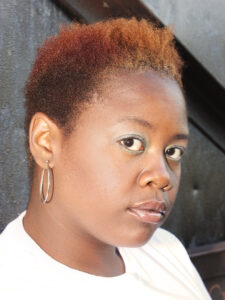 K Edmonds (Director, Sound Designer)  is a multi-faceted performer/director with many credits to her name. Productions include: Jeff Daniel’s Roadsigns and Willow Run; both at the Purple Rose Theatre, Bessie Smith in Devil’s Music, The Revolutionists; both at Theatre Nova, Good People at Open Book Theatre, Ain’t Misbehavin‘ at Performance Network Theatre and Ruined at Plowshares Theatre. An accomplished musician, writer, and director, K previously directed Love Space (One to One Virtual Theatre) and You Talk White (Driveway Theatre) with Open Book. This alum of Second City Detroit is the founder of Jamii Youth Theatre in conjuction with the non-profit group the Detroit City Lions, where she teaches musical theatre to children ages 6 to 16. K is thankful of the support from her mother and inspired daily by her daughter Kemistry, and the host of talented performers, producers and directors she has been blessed to work with throughout her career.  Catch her at the Purple Rose Theatre this spring as the Assistant Director of In Common. 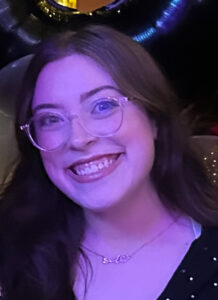 Kiah Manthei (Stage Manager) most recently assistant directed Legally Blonde: The Musical (Downriver Youth Performing Arts Center (DYPAC)) and has stage managed various other plays and musicals in the Metro Detroit area, including My Dad Was Fifteen Feet Tall (Outvisible Theatre Company), Princess Whatsername (DYPAC), The Turn of the Screw (Outvisible Theatre Company), and Xanadu (DYPAC). Kiah graduated from Wayne State University in 2019 with a Master of Social Work. In her free time, she enjoys hanging out with her cat, vision boarding, and reading books that make her cry. She hopes you enjoy the show, and reminds you to slay every day! 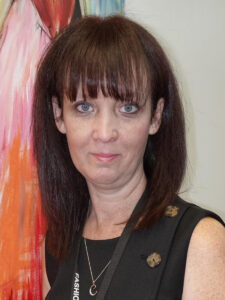 Cheryl Zemke (Costume Designer) is a Multi Award winning Fashion Designer, Artist, and Owner of C. Creations Custom Sewing & Design. Her store, Cheryl Zemke Boutique, is located at 2934 Biddle Ave. in downtown Wyandotte. The boutique sells her handmade fashion and art, as well as “Artfully Chosen” fashion and gift items. She also does custom sewing and alterations on site. Zemke was born and raised in southern Michigan, received a B.S.B.A. from Lawrence Technological University, and earned an Associate Degree in Merchandising at the International Academy of Merchandising and Design, graduating as class Valedictorian. Zemke has been a part of the Open Book team since 2017, this show will mark her 11th as a costume designer. She particularly enjoys costuming, saying it “allows me to use many of the skills that I have acquired from classes in Fashion History.” Contact Cheryl Zemke via her email czcreations@hotmail.com, website www.cherylzemke.com, Facebook or Instagram @cherylzemkeboutique. 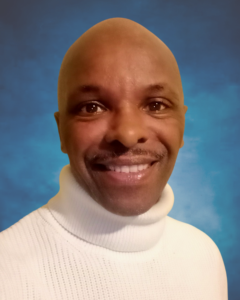 Drew Hall (Scenic Designer and Painter) is a virgin to our Open Book Theater family and is thrilled to be here. He has worked as a Scenic Designer and Scenic Painter with such companies as Stagecrafters, St. Dunstan’s, Birmingham Village Players, Mosaic Youth Theatre of Detroit and University of Detroit Jesuit. You might have seen his  latest designs if you saw Little Shop of Horrors or Mamma Mia at  Stagecrafters. When not covered  from head to toe in paint, he likes to relax by either going horseback riding or chilln’ at home with a basket of yarn and knitting. 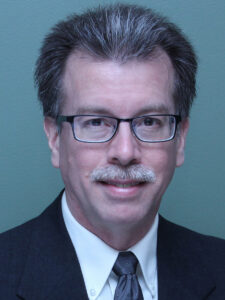 Gordon Mosley (Scenic Builder) joined the Players Guild of Dearborn in 1986 and has been involved in theatrical productions ever since. Over the years he has also worked with Southgate Community Players, Downriver Actors Guild, and Lincoln Park High School just to name a few. In 2012 Gordon was inducted into the Dearborn Theater Hall of Fame. Among his more notable construction projects were The Car for I Remember Mama based on a 1908 Cadillac, The Gazebo for Do You Wanna Dance?, The Sewer for Guys and Dolls, and The Mid-Century Furniture for Promises, Promises. Gordon has returned to OBTC for his fourth production as set builder and continues to upgrade set design and construction methods with his unique style of building and the use of 3D modeling software.

Krista Schafer (Producer, Props Designer) is the founding Artistic Director of Open Book. A native Michigander, Krista holds a degree in theatre from Northwestern University and has worked in theatres across the country acting, teaching, and directing. She has won Wilde Awards for performing (Emilie) and directing (This Random World and Watson Intelligence). She’s thrilled to be building a company that gives these strong and courageous theatre artists a place to work and play, and thanks you for joining us! When not at the theatre she loves to read, dance, play games, do jigsaw puzzles, and spend time near or in water.