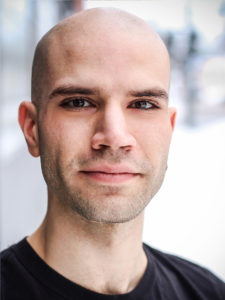 Jonathan Davidson (Eddie) can lift over 8 lbs. (approximated) of cat over his head with minimal effort. This and many more feats of strength can be found in his self-published ‘Zine Cat-hleticism: Napping Your Way To The Top. When not researching the best cat-based modes of self improvement, Jon is busy being stumped by the puzzles on the backs of cereal boxes and staring at shrubberies. Jon is humbled to return to the Open Book stage for the 5th time (previously appearing in Peter and the Starcatcher, Life Sucks, Emilie, and Curious Incident), gives ten lifetimes of love to Ann, and thanks you for seeing the show.

Krista Schafer Ewbank (May) is the founding Artistic Director of Open Book, was last seen as Cass in Wonder of the World, and hopes you’re not tired of seeing her on stage yet.  Krista recently received the Wilde Award for her performance in last season’s Emilie, and was previously nominated for her performance in Boy Gets Girl as well as for her direction of Peter and the Starcatcher. A native Michigander, Krista holds a degree in theatre from Northwestern University and has worked in theatres across the country acting, teaching, and directing.  She recently directed for Grosse Ile High School and the Grosse Ile Boar’s Head Festival.  Krista has been a fool for Sean for 23 years.  She’s delighted to be sharing the stage with three of her favorite guys (or is that men?). Thanks for gleefully coming along on this bucking bronco of a ride.

Lindel Salow (The Old Man) has been profoundly fortunate to be a part of Open Book for the last several seasons and was last seen as Roger/Voice Two in The Curious Incident of the Dog in the Night-time. Past OBTC work includes: Vanya in Vanya & Sonia & Masha & Spike, Sagot in Picasso at the Lapin Agile, Rudolf Bauer in Bauer. He has also appeared at Puzzle Piece Theatre’s The People’s Temple, Ambition Facing West, and White People as well as at the JET, Performance Network and the Attic Theaters. Outside of performing, Lindel is an accomplished make-up artist with his artistry appearing in the PBS special, “Pavlo, Mediterranean Nights”, the Sam Levinson film “Another Happy Day” and in the work of Hollywood photographer Steven Kahn. He also enjoys spending time studying maritime history (and giving the occasional lecture), dabbling in stereo photography and isn’t adverse to general mischief making, with his spouse Chuck close behind egging him on! 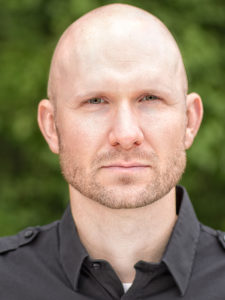 Joshua Brown (Martin) is proud to be gracing The Open Book Theatre stage once more.  He could be previously seen in Open Book productions of Curious Incident, Ada and the Engine, Be a Good Little Widow, Life Sucks,  Picasso at the Lapin Agile, Who Am I This Time?, and Kimberly Akimbo.  He also recently appeared on the Outvisible Theatre stage in Venus in Fur and at The Dio Theatre in Murder at the Howard Johnson’s.  He can also currently be seen in the Anawim Productions short film American Prophet.  Josh would like to thank his wife Staci, his parents Bob and Wendy, and all of his friends for their continued support. 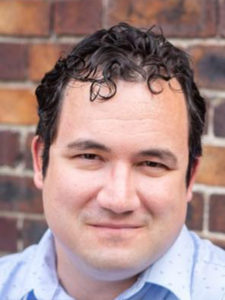 D.B. Schroeder (Director and Sound Designer) would be a fool if he said he wasn’t excited to be making his Open Book debut.  D.B. is the Producing Artistic Director of Puzzle Piece Theatre where past directing and design credits include:  R.U.R., Ambition Facing West, and The People’s Temple, among others.  He is a company member with Shakespeare in Detroit where he directed Macbeth and Henry V.  He spends his days as the Education and Outreach Coordinator at The Macomb Center for the Performing Arts.  Prior to his time in Michigan, he was the Artistic Director of the Chicago based Thunder and Lightning Ensemble.  He holds a B.F.A. in Theatre Performance from Missouri State University, and apprenticed at The Shakespeare Theatre of New Jersey.  D.B. sends all his love to his amazing wife Sarah and his two children Analise and Gus who make him proud every day. 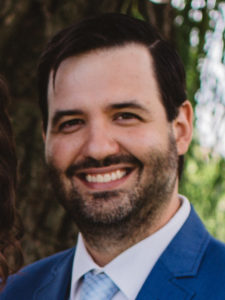 Patrick Nelson Hanley (Fight Choreographer) is working with Open Book Theatre Company for the first time. He proudly works as a fight choreographer and co-facilitator with Detroit Public Theatre’s Shakespeare in Prison program, as well as the Director of Education for Water Works Theatre Company’s youth programs. With the copious amount of free time he has left, Patrick stepped in to the role of Production Manager for Detroit Pubic Theatre’s 4th season. He holds a BFA in Acting from Wayne State University and has selected fight choreography credits with Planet Ant Theatre, Water Works Theatre Company, Shakespeare In Detroit, Royal Oak High School, and the Elizabeth Theatre at Park Bar.

Danielle Gilbert (Stage Manager) is thrilled to be working on yet another show with Open Book! She has previously stage managed several shows here, as well as trying her hand at House Managing a few. Some of her favorites include Calypso’s Corner, Peter and the Starcatcher, Be a Good Little Widow, Ada and the Engine, and most recently, The Curious Incident of the Dog in the Night-time. When she is not Stage Managing you can find her in Ann Arbor making fancy wooden boxes for roleplaying games, or playing said roleplaying/board games with her friends on the weekends. She would like to thank her Mom and Dad, for coming to every show and always supporting her future, and Kevin, for his unwavering support and kindness.

Harley Miah (Lighting Designer) is a professional in the entertainment technology industry. He is a freelance lighting programmer for a large number of nightclubs, concerts and festivals across the country, and the chief lighting designer for IKO Global Productions. Harley is the resident lighting designer for Open Book and the Outvisible Theatre Company in Allen Park, as well as at Northville High School where he teaches students how to design lights. He has designed the lights for all of Open Book’s shows, and designed sound for Boy Gets Girl in 2017. He earned a Wilde Award for Best Design – Lights for his work on Red in 2015. When not working in the theater, Harley spends his time painting, building Lego stages, loitering in museums, and seeing as many shows as he can in this great theatre community we have in Southeast Michigan. He hopes you do the same.

Bradly Byrne (Scenic Designer) first tech directed in 1976 for the high school play The King and I, and picked it back up in about 1995 when his children were 8, 7  and 4 years of age. He got started with Youth Theater in Southgate and found it was a great way to be with his kids. His oldest recently turned 30 and he’s still at it! Bradly usually works on two or three productions year since then including Joseph and the Amazing Technicolor Dreamcoat,  Once Upon a Mattress, Jesus Christ Superstar, Jekyll and Hyde, and many, many more. At Open Book he designed Picasso at the Lapin Agile, Doubt, and did the scenic painting for Good People. Bradly was also a muleteer in Man of La Mancha and the lead in Smokey Joe’s Cafe.