Theatre in the time of COVID

Our seventh season greatly changed by the global pandemic.  Using our art, we explored new ways of creating and presenting live theatre, always focused on our mission TO PROMOTE CONNECTION THROUGH THEATRICAL STORYTELLING.  We also chose to focus on the uniqueness that our audience loves, including our intimate settings and the immediacy of the audience/performer connection.  We imagined and presented new forms of theatre that preserved the safety of our audience and performers as we explored what theatre is, what it can be, and how it brings people together.

click on the graphics to learn more about the shows! 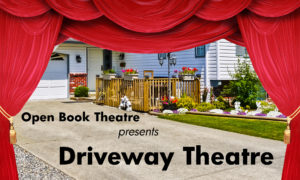 Driveway Theatre took two performers out into the community for 30 minute socially distant performances.  From the end of June to the end of September we commissioned 2 world premiere plays and hired performers who lived together.  We also offered interactive improv. We performed 42 shows for over 1000 audience members in driveways, back yards, parks, and parking lots throughout the Metro Detroit area.

Watch a video with clips from all three of our  2020 Driveway Theatre offerings! 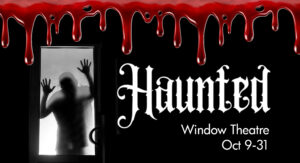 In October for Haunted window theatre two performers and over 40 shadow puppets told spooky stories in our lobby windows, delighting audiences of all ages who watched from our parking lot.  Director Sarah Hawkins Rusk adapted Edgar Allen Poe’s The Raven, The Legend of Sleepy Hollow, and Dracula, the actors wore microphones and a thrilling soundtrack was added and played for the audience who could either sit in chairs in front of the windows or in reserved car spots further back. 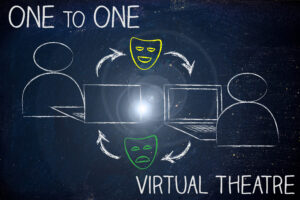 As it became clear that we wouldn’t be able to welcome our audience indoors, and the weather grew too cold for outdoor performances, we developed a 6 play season of One to One Virtual Theatre. Each show was just under 10 minutes: an intimate, live experience between one performer and one audience member (hence one to one!).  The length and format allowed for the plays to be very responsive to current events, presenting material that goes deeper, opens introspection, and sparks conversation.  Each play was a world premiere, commissioned for this new format.

Watch a 2.5 minute video with short clips from several of the plays HERE. 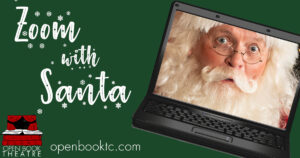 For the holidays we offered Zoom with Santa and children across the country – and even the WORLD – interacted live with Santa and Mrs. Claus. They were thrilled to see the letters they had sent in Santa’s  hand, find out that Santa knew the names of their pets, and even dance with Santa!  A set was built in the theatre.  Santa and Mrs. Claus were a real married couple, and all our crew wore masks and practiced social distancing.  Children were greeted by an elf, and then transferred to the North Pole to talk with Santa.  Watch a 2 minute trailer with clips from actual visits HERE. 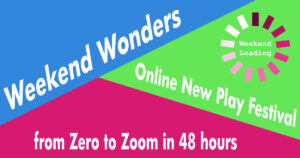 In winter of 2021 Open Book introduced the Weekend Wonders Online New Play Festival:. a monthly online play festival presenting 4 new plays over the course of just one weekend!  Playwrights had 24 hours to write a 10 minute play on a given theme for a specific cast.  Themes, creative teams, and other fun challenges were announced on Thursday. By Friday the scripts were done and the directors and actors had 24 hours to memorize and rehearse, and all 4 shows were streamed live on Saturday night!  From Zero to Zoom in 48 hours!  Each month was sponsored by a local business or supporter of the theatre.